Croatia is probably the best sailing destination in the world. There are several reasons: You don’t have to cross the islands on long distances, because they are all close together and much safer compared to other destinations. The winds are generally calm, and the islands and coastlines are lined with ancient historical ruins. There are essentially 1200 islands with unspoiled bays and a thousand miles of coastline in this Balkan country!

In general, Croatia is a very safe country on land and sea – with low crime rates and its sailing charters are still very affordable. Preparation is the most important aspect of staying safe when sailing. It is crucial to listen to the latest weather forecast and adjust accordingly for strong winds as you will find out later on. 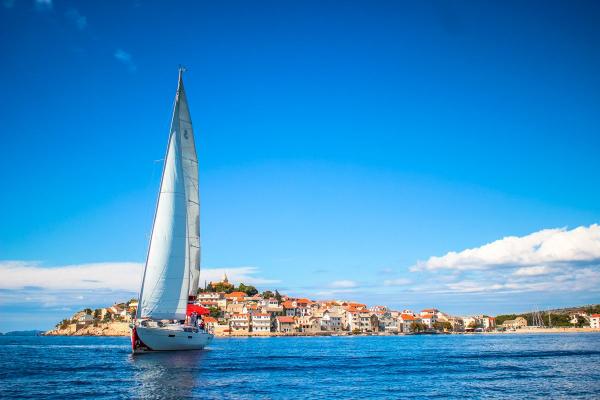 Another benefit of the country that is home of many islands is that you are never too far away from a port. Maps that are up to date are necessary to ensure safe and accurate navigation. Of course, if you are on a skippered sailing holiday as a novice sailor - all of those considerations are presumably known to your skipper.

Dalmatian Coast (Southern Croatia)
The most popular sailing route in the Dalmatian region: Split to Dubrovnik offers the best of Croatia to sailors. Explore the islands of Hvar, Brač, Mljet, Korčula, and the UNESCO cities Split and Dubrovnik. You can also explore the natural wonders of Mljet National Park. The minimum sailing duration is approx. 5 days, but it will be worth doing it! 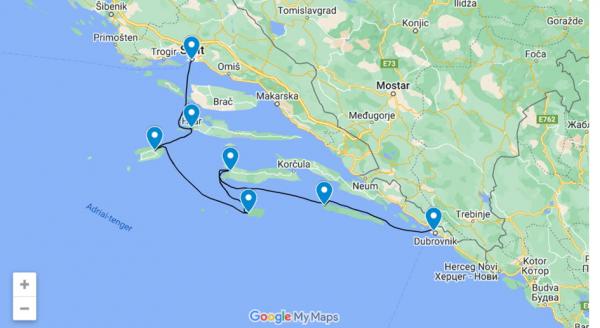 Another 3 day journey starts from Split and leads to Brač with white stones and olives along the way. Following Brač is Hvar with its truly amazing lavenders, wine fields, and Vis, home of the unique Stiniva bay. On this route, you can also visit the impressive Blue Cave on the island of Biševo.

Istria (Northern Croatia)
Istria is the largest demi-island in the Adriatic Sea, located along the northern coast of Croatia. It was part of Italy between 1919-1947 and is still influenced by Italians to this day. Coastal towns like Rovinj, Porec and Pula are popular destinations for sailors and it can get quite crowded during the summer months. However, if you move a little bit further into Istria you will explore amazing towns and villages that are less crowded. Istria is a great destination for families or groups looking to experience the natural beauty of Croatia.

In the north, the Istrian peninsula and Kvarner Bay have a high concentration of marinas and a more cosmopolitan feel than Dalmatia, due to the persistent Italian influence.

Kornati is easily reachable from Zadar, Biograd or Murter. To experience the Croatian wilderness, start here. There are 152 islands, rocks and islets. The Kornati archipelago is the densest group of islands in the Mediterranean. Tricky sailing conditions like rocks sticking out of the water make it less appealing to newcomers, but it is ideal for a little peace and quiet. We highly recommend taking pleasure in deserted bays.

Harbors and Marinas
There are more than 50 marinas in Croatia, half of them state-owned, recognizable by the acronym ACI (Adriatic Croatia International Club).

The prices of the ACI Marinas differ between different regions. While the popular ACI marinas in Split, Dubrovnik, Palmizana, Skradin or Korcula are high-priced, other marinas such as Umag, Piskera, but also Cres and Zut belong to comparably cheaper harbors.

The ACI network ensures that you can always find a safe haven almost anywhere in the Croatian Adriatic. However, the demand for space is still high. Overnighting in a marina is great for improving the confidence of inexperienced crew and for a little extra comfort. You will be moored on lazy lines and protected by a breakwater that reduces the motion of the boat to a very gentle sway. You can be sure to have access to showers, toilets, shore power and water, but sometimes electricity and water supplies might be restricted.

One of the most popular marinas in Croatia is Marina Punat, located on the island of Krk. Here you will find everything you need: two a la carte restaurants, Hotel Kanajt, permanent berth in water or on land, marine shop, original spare parts and the superbly equipped Yacht Service. All of this makes Marina Punat a second home to many sailors.

Timing is essential
Avoid the busy season between June and September if you can. Italians sail over en masse at the beginning of August and popular ports can become very crowded in the evenings. Charter prices are at their peak and most of the marinas add ten percent to mooring fees.

May and June can be warm and sunny, with relatively calm weather; however, the sea is still warming up. September is great due to the sea temperatures, but you may find that some of the remote restaurants are closed.

Serious sailors may prefer the more challenging weather conditions in the shoulder season, which means in April and October. Experts sometimes want to join in a winter sailing regatta. These months are just right to set your sails and trim the jib with extended periods of a strong northern wind called Bura and a humid east-southeast wind named Scirocco.

Winds: Usually Friend, Rarely Enemy
Bura is definitely the most famous high-pressure wind that comes from the slopes of the coastal mountains towards the sea. The strongest bura was measured in 2003, reaching gusts of 304 km/h, but it’s usually around 80 knots (~150km/h) as it gains momentum. Getting into a squall of 80 knots, breathing can be hard because of “sea smoke”. This phenomenon occurs when the wind tears off tiny droplets from the top of the waves. Its frost doesn’t even nourish your skin.

There is a long-established belief that a very strong bura appears three times in March. This phenomenon is called “tri marčane bure”. The meaning behind it is “three buras of March”. One thing is for sure: when bura sails, you don’t.

Jugo sometimes referred to as Šilok. It appears throughout all four seasons; it is more frequent in the south than in the north of the Adriatic. It doesn’t only bring big changes in the weather, such as dark clouds and rain-filled storms, but it also causes a change in mood, resulting in "fjaka". In other words: pains, depression, body aches, headaches and even grumpiness. The word “jugo” can be used as a synonym to inconvenient. You could say “This work is really jugo”.

Maestral is the good ally of sailors. Sometimes called summer wind, it cools down sailors during those hot summer days. It blows from the sea towards the land due to the differences in temperature between the land and sea itself. Sometimes it lasts only a day or two, but usually it lasts several days, even more than a week. It is definitely stronger in the central Adriatic region. It is stronger in the southern Adriatic areas than the northern ones. The absence of Maestral sometimes happens alongside a great change in the weather that follows.

Sailing Etiquette
1. Steer clear of oncoming boats and allow for lots of space, especially for larger ones.
2. Try to anchor not too close to others. The wind can change direction quickly and cause huge damage on your boat or others.
3. If you find another sailor in trouble, try to help them out.
4. You can enjoy crystal clear Croatian waters; this is why it is important to leave it in the same condition that you found it in.
5. It is all too easy to be complacent about water when you are surrounded by it, but your onboard water supply is one of the most valuable commodities you have. You have a limited supply of fresh water and you need it not only for drinking, but also for cooking. Ensure that everyone aboard is aware of this aspect and the board has stacked up on the right amount of water.
6. Learn a little Croatian – it will make the locals happy!
7. The mariner will call you using a specific international language with a lot of hand-waving, but there is no reason to worry. You will get it, even if you didn’t think so.

Not like in the US
Some bloggers say that Europeans are very respectful of their neighbors. In the US, people would probably be very chatty or party too loud, but not in the Adriatic where everybody behaves gently. When sailors put music on, they usually ask their neighbors if it is too loud and honor their requests to turn it down.

Lazy Lines
Lazy lines are used in crowded marinas where multiple anchors would become fouled. Instead of the anchor holding the bow away, the bow is connected to a heavy bow line, which is pre-attached to a concrete block on the sea-bottom.

Weather is not always friendly
During the busy season, the climate is almost perfect, however nature can still be erratic, which may cause last-minute changes if the weather becomes too wild. Before you set up for a trip always check the weather forecast and regular updates. Coast guard Maritime Safety Information broadcasting can be easily monitored on boats equipped with a VHF Radio.

Cheerfulness of your holiday may depend on your Croatian Yacht Charter
Renting a yacht or a sailing boat can be a depressing business when unexpected damages occur. Smashing another boat, breaking down the boat railing or tearing the sail can easily ruin your holiday, that’s why you should carefully find your reliable yacht charter agency!

Danielis-Yachting is a great choice, which offers sailing yachts, catamarans, motor boats and gulets in Croatia, Greece, Italy and Turkey, and their Google Map’s reviews are excellent.

Alfred Hitchcock, Game of Thrones, Island of changing shape, Lover’s Island
There is a Croatian island with a nickname: "the shape of heart". This is the Island of Galešnjak, also known as the Island of Love.

There is also a famous beach in Croatia called Zlatni Rat on the Island of Brač, which changes its shape depending on sea currents and wind.

Did you know? Game of Thrones, the most popular tv show in the world, was filmed in Dubrovnik and Split.

Zadar is home to the most beautiful sunset in the world - at least according to Alfred Hitchcock. In Zadar, you find the world’s first sea organ which uses waves and wind to work out beautiful hypnotizing sounds.

Do you have a good idea? Write a guest post for us!

In modern industries, most of the organizations use some kind of methodologies to improve product, processes, or just the daily work. By changing several input factors, engineers can come up with better products and sometimes they can reduce production times and costs dramatically.


Shadow IT in the New IT Management Triangle

This article is about the reasons companies are always forced to extinguish the flames in Shadow IT, how they can study the root cause while struggling with their internal IT and why they still believe in the suppliers’ mirage.


Students and Teachers on the edge of Burnout

Online learning may have much negative effects beside the generally known positive ones – this turned out from a survey conducted by Doksi.net. It revealed that learning from home goes hand in hand with outstanding exam grades, enormous learning loss, extremely low motivational level and the overall picture is even more depressing.